Many have asked what is Ft Portal like? How is it different from a city in America? Well, in short, it’s…….. different. Different in many ways and sort of the same in others. It is a city of about 50,000 but spread out. It sits in the middle of a mountain valley with the Rwenzori Range to the west which is a haven for some of the most beautiful national parks in Africa. So those things could make it sound like a city in America! It is more than just the town where a.k.a. HOPE resides!

It is a city where when the power goes out at promptly 8AM several times a week, you know they will be doing maintenance / repairs for about 12 hours. That is hard on businesses but Uganda uses generators as much as they do the city’s power. When power goes out at night, there is a “fault” as they call it here. It is weird when you look out and the ENTIRE city is black. Yet you hear the signs of life all over as Ugandans come alive at night.

Some days you will have water flowing into your tank and other days nothing. Another fact of life here. The fact that they have power and water here sometimes is an indicator of progress since there was a time not long ago that neither were readily available. 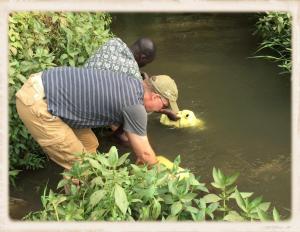 We try not to use the city supply so we can make sure we don’t run out. Since Debra and Enos planted 2 gardens, we use a lot of water. If we have rain, we have a 2,000 liter tank that captures it and so we can use that but when it is dry, we will go down to the river to fetch it in jerry cans. We are just grateful we can find water as Debra saves us a lot of money on veggies with the garden.

It is a city where bodas (motorcycle taxis), bicycles & walking are major modes of transportation. Not just transportation for humans but also for items and loads you wouldn’t see in America like bedframes, dressers, TV’s, satellite dishes, large, heavy loads of matooke (potato like but look like green bananas). Those are usually on bicycles. You name it, they can find a way to haul it.

It is a city full of churches. Our home church is Kabarole Baptist. We find that in reality churches are in many ways the same here as back in America. You have problems. Just add humans and we make sure no church is perfect. When there is a church service you can be assured you WILL hear it! Most all have at least one very large speaker and an amplifier. They crank it and since the windows are always open, everyone around them can

hear the singing and message. The Muslims are also rather vocal. There are mosques everywhere and they have a large bullhorn on top of their buildings so you hear the Islam Call To Prayer, or Adhan at the exact same times all day long. We even had a church set up in our residential neighborhood for a week and the service ran from 6AM well into the night complete with a loud sound system. They are not shy about faith here.

We buy lots of food from the many open markets around town. Some are little shacks that sell fruits, veggies, eggs or in Irene’s case (right), cassava breaded fried Irish (white potatoes). We had her make a batch of 140 of them for 14,000UGX ($4.14) and gave them to the a.k.a. HOPE kids! Her “store” is just down the street from us.

Mpanga Market is a 2 story building that has the center of it open and lots of vendors selling foods. They have “supermarkets” but they are no bigger than a large convenience store.

Now, if you want a pizza, you can find a few places that proudly serve them! They aren’t bad at all. The cheese is a bit different. Debra like one that has bleu cheese and tomatoes. There is a restaurant called The Duchess where they have a coal fired pizza oven. But that’s pizza. They do have ice cream as displayed here by our friend Solomon as he proudly shows off 2 scoops of vanilla and one chocolate! It is different but some of it is pretty good. It’ll do for an occasional treat; it is too expensive. 7,000UGX or about $2 for 2 scoops. May not sound like much in America but here it is. Ugandans love food and the portions if you eat out are large so you never starve. You can find my all time fav, cheesecake…. But it is NOT cheesecake. It’s either a weird jello-like custard thing or like a pound cake. Bummer….. 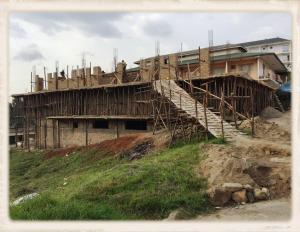 Ft Portal has it’s issues like any town. There is construction but the buildings usually get partially built and then they stop until more money is found. I marvel at the way Ugandans work. They are hard laborers and don’t have a lot of the machinery we enjoy in America. Seeing a building going up is an OSHA disaster waiting to happen.

Scaffolding is made of braches tied together and they will temporarily hold up a floor with thick tree branches. We have found that Ugandans are experts in the area of jerry rigging!

Trash is an issue all over. People just tend to dump trash anywhere. In America we’re so used to having trash cans outside businesses and dumpsters behind every building. Our trash service here is a wonderful man named “Happy John” who comes by once a week with his makeshift wheelbarrow. There are a few areas you can find a concentration of trash but they sit next to makeshift homes and businesses and people are always rummaging through it. 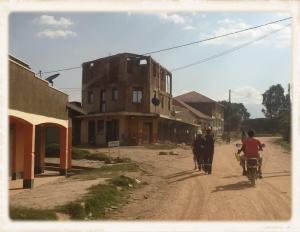 Most of the streets are dirt and many not well kept up. but some are. While Ft Portal is small, we are still running into all sorts of side streets that lead to concentrations of small businesses we’ve never been on. You get accustomed to having a healthy layer of dust on your car, your shoes or in your home. It is a fact of life.

Ft Portal is home to the Tooro Kingdom. In Uganda there are several kingdoms and even though the country has a president, the kingdoms and palaces are in place. A few days ago there was a huge coronation & celebration for the current king who is in his 20’s.  Warning to muzungos: If you drive up the road to take a picture of the palace, there are “procedures” which include signing in, going through a lengthy presentation and a tour. Oh, and they want money!

Talking about what Ft Portal is like would be grossly incomplete without noting that Uganda is called “The Pearl Of Africa” and the area around our town is filled with amazing scenery and beauty. The majestic Rwenzori Mountains are outside our back door and national forests filled with various creatures and the major national parks. Pictures would never do it justice. We are just starting to get some time to explore.

We are attempting to learn the local language, Rotooro. “Mukama Seway” (sp) is praise God, “Waverly Muno” (sp) is thank you very much. We have so much to learn. Oh, and add to that, the aka KIDS are trying to teach us Luganda which is their language. With any luck, we will be tri-lingual in a year!

We are incredibly blessed to be able to first of all be called here to serve and second, to live is such a beautiful place with amazing people. In many ways the culture is so much different than in Kampala. That’s all for now! Thanks to all of you who follow us and support us in various ways. It is a huge encouragement to us as we Journey Uganda!